For too many children like Tjandamurra, undetected hearing loss leads to delays in listening and communication skills. Parents and children can be frustrated, unable to communicate effectively in everyday life.
Now aged three, Tjandamarra has already experienced more than his share of hospitals and specialists. He experienced numerous ear infections and a burst eardrum before being diagnosed with chronic hearing issues. Tjandamurra struggled to hear and had difficulty learning to communicate well.
“I knew what to look for because of the experience I had with his older brother Rylan. We had such trouble getting him hearing help in the beginning – it took me years to get grommets for him,” said Tjandamurra’s Mum, Kaylah.
Kaylah says it was almost by chance that Tjandamurra’s hearing journey took a leap. Having started playgroup at the Mindaribba Local Aboriginal Land Council, within the first month there was a pop-up hearing clinic run at the playgroup.
“We jumped at the chance to attend the clinic and haven’t looked back”
At the pop-up clinic, Tjandamurra and Kaylah completed a new hearing assessment tool called the PLUM, developed by the National Acoustic Laboratories, the research division of Hearing Australia.
The PLUM assessment indicated a score of 18: well below the acceptable level of listening skill for a three-year-old.
Wasting no time, Kaylah decided to get Tjandamurra fitted with a bone conduction hearing aid to provide immediate assistance. With this hearing technology, the world opened up for the vibrant boy. Tjandamurra is now wearing his hearing device and working with his regular speech therapist to improve on his speech and listening skills.
Within two weeks of getting his bone conduction hearing aid, the PLUM assessment was repeated. Tjandamurra achieved a score of 28, an increase of 10 points! While the score was still a little below his peers, the results showed the positive outcomes that could be achieved within a short time after the intervention and support.
Within a month, Tjandamurra had gone from a toddler with little-to-no speech to now being able to say 30 sentences. It’s a huge jump in his development! Now that he can hear there is no looking back.
“I get tears when I speak about it, it’s been such a long road,” Kaylah said.
“Now he can hear me clear as day and he even responds – it’s so good to hear his voice. He has a little man voice.”
Kaylah’s advice to other parents concerned about their child’s hearing is to ask for the PLUM and HATS assessment now – don’t wait.
“You don’t want to leave it. The earlier you can get your little one help the better.”
As a mum of eight, Kaylah has seen the difference in early diagnosis and hearing device fitting can make on a child’s hearing and overall development.
“Rylan (the older brother of Tjandamurra) was seven years old when he got grommets and now, at age 13, there are some speech and learning issues that might not have been there if we had gotten to it earlier.”
If you are concerned about your child’s hearing, ask a health or childcare worker for a PLUM and HATS assessment. The PLUM and HATS tools have been designed specifically to help detect hearing and speech problems in Aboriginal and Torres Strait Islander children. One in three* children are at risk of hearing problems before 6 years of age. Detecting and treating the problem early could improve the child’s future. 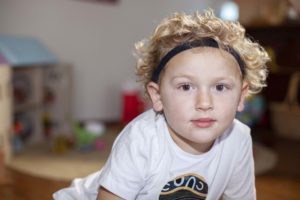 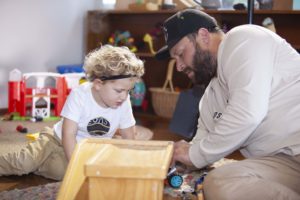 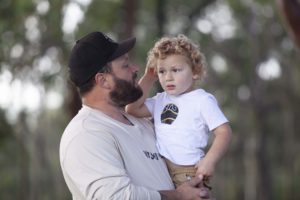 This is a story of two children that shows how the PLUM and HATS can be used to support yarning with parents and carers and guide decisions to meet the needs of each child.
Shaira and Caleb were both seen by clinicians at the Deadly Ears Program, which is an ear and hearing service that works in remote Aboriginal and Torres Strait Islander communities in Queensland. When appropriate and with consent, Deadly Ears refers to children and their families who may benefit from hearing aid to Hearing Australia. In this instance, Shaira and her family, and Caleb and his family were seen through a telehealth service.
Both Shaira and Caleb were two and a half years old. Both have had middle ear problems, and it was unclear how long each child has had these problems.
When the Hearing Australia audiologist first met Shaira and her parents by telehealth, they talked about Shaira’s hearing and completed a PLUM and HATS.
Shaira had a PLUM score of 35, and a HATS score of 45. These showed that her communication and listening skills were on track for her age. The audiologist was able to assure the parents that Shaira was doing well, even though she had some ear trouble. The audiologist recommended continued primary health care for her ears, and that she has a PLUM & HATS review in 3 months’ time to check that her listening and communication skills were continuing to develop.
The Hearing Australia audiologist next saw Caleb and his parents by telehealth, and as part of the session completed the PLUM and HATS. Caleb had a PLUM score of 21 and a HATS score of 15, which indicated that his listening and communication skills were not on track. The audiologist explained to Caleb’s parents that he may have a hearing problem that has affected his listening and communication skills. To help Caleb to hear better, she showed Caleb’s parents a bone conductor hearing aid and explained how this would help Caleb to hear when his ears were blocked up. Caleb’s parents decided to try the device.
“He immediately brightened up, and for the first time in the appointment used his voice and started giggling: a sure indication that he did have a significant hearing loss,” the audiologist reflected.
Caleb’s parents decided they would use the device, as it would help Caleb listen and understand better during storytime, and when they talk to him at home.
“The PLUM and HATS tools have been really useful for telehealth appointments. They are a lovely way to explore with a parent how their child is listening and talking at home,” the audiologist said.
The use of the PLUM and HATS supports clinicians to have a meaningful yarn with each family about their child’s listening and talking skills, which leads to making decisions for each child.
Shaira’s parents were assured that her listening and talking skills were on track, that her ear trouble had not so far caused a delay in her development. This also led to a discussion about monitoring her ear health and skills development.
On the other hand, the use of the PLUM and HATS with Caleb revealed that he needed help. Rapid action was taken to fit hearing aid, and his parents could see for themselves that it helped Caleb to hear better, find his voice, and enjoy family stories.
*Names have been changed to protect patient identities.

The tools and training are free.

Here you can register to complete training and receive a certificate. Registration allows you to use the online version of the PLUM and HATS that provides automatic scoring and reporting.